My Favourite Tool For Language Learning

The Challenge of Learning a New Language

It doesn’t matter if it’s your first, second or eighth: learning a new language is hard. There’s just so much stuff to learn: syntax, grammar, pronunciation, politeness, culture and vocabulary.

But it’s also an extremely fun and rewarding challenge that can unlock the full potential of what a country has to offer.

I’m currently two months in to learning Portuguese (the European variety, not the more popular Brazilian one).

By far, the hardest part of learning a new language is the sheer amount of new words you have to learn. Studies show that up to 75% of day-to-day English (and other languages presumably) can be spoken if you know the most common 1000 words. Beyond that, languages tend to have tens of thousands of words. But even still, a meagre goal of learning and memorising 1000 new words is a lot!

How do you actually memorise 1000 words? If you have a photographic memory, you could just spend an afternoon reading them in a dictionary and be on your way. Sadly, I’m not one of those people. For the rest of us, there’s the popular tool called flashcards. You may have used something like this in school. For learning a language you’ve got the English word on one side and target language word (Portuguese for me) on the other side.

For example, one side would have “water” and when you flip it, it says “água”. Normally you’d have a deck of these cards and go through them one by one to test yourself on the translation, then flip the card over and see if you were correct.

Anki is an app that takes flashcards a step further by taking them digital.

Not only that, but according to neuroscience there’s actually an optimal way of showing yourself the flashcards to let you learn as much as possible in a given time. Instead of reviewing the whole deck everyday (who’s got time to look at thousands of cards every day??), you review the ones that you’re just about to forget.

This method is called spaced repetition. Used and loved by many language learners, medical students and other students of all kinds around the world. Including me. 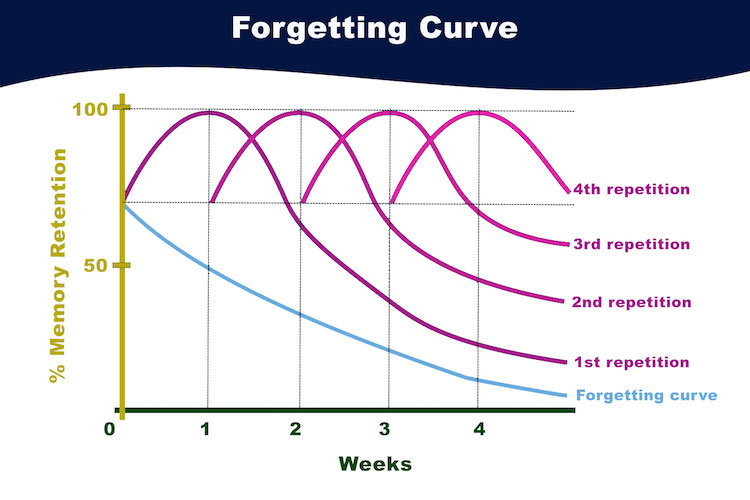 Ever tried to learn a word and then forgotten it 0.2 seconds later? No worries. Anki automatically shows you words that you’ve forgotten more frequently. The more times you review a card, the further it gets pushed into your long term memory until eventually you can remember the word for good.

Our time is limited. Contrary to popular belief, learning a language as an adult is not only a possible endeavour, it’s actually easier than when you’re a kid. You have more discipline and context to learn from. The challenge is that as an adult you usually have a full-time job, family, social life, fitness regime, Netflix etc that are all competing for your time. We don’t get to go to school and study a new language for 8 hours a day like kids do.

That’s why I use Anki. With my limited time, it lets me memorise as many new words as possible for the time that I give myself to study. Meaning that I can learn more words in a limited block of time per day.

There are other flashcard apps out there, but I found Anki pretty early on in my journey and have stuck to it for these reasons:

Like I said at the beginning on this post, learning a language isn’t just about learning new words. While Anki is great for learning vocabulary, it can also be used to learn grammar, pronunciation and other aspects of a language.

After all, learning a language is all about speaking to people. Real people.

That’s why I also do face-to-face lessons online (through iTalki) with a native Portuguese teacher (a lovely lady named Joana). With my teacher I get valuable conversation practice and some more regular structured lessons. For the days where I don’t have a lesson, I’m using Anki to commit to memory all of the new words we learned in our lesson.

I’ve used Anki pretty extensively at this point: to learn a decent amount of Mandarin and Khmer (the Cambodian language) before this Portuguese journey. It’s stuck with me more than any other tool and that’s why I always recommend it. In a future post I’ll be going over some of my favourite tips for using Anki for language learning.